Uniper UK were awarded four six-year contracts by National Grid ESO, to provide inertia services and voltage control to the grid under phase 1 of its Stability Pathfinder. In turn, Uniper appointed Siemens Energy to deliver the rotating grid stabilisation technology that will enable Uniper to provide dedicated grid stability services to the British electricity system operator National Grid ESO at their facilities in Killingholme, Lincolnshire and Grain, Kent.

Two such units were to be installed at the Isle of Grain site, but before any of the multi million pound installation could commence, numerous detailed and highly accurate foundations had to be constructed for Seimens equipment and control centres. Randall Contracting were selected as the preferred contractor for the Isle of Grain installation and are proud to have been part this successful project.

The location for the new installation was the old Grain power station site. All that remained of the old power station was the Turbine hall slab, a three metre thick reinforced concrete slab, into which we had to excavate for sumps, large transformer pits and numerous foundations using a combination of Hydro- demolition and more traditional concrete breaking machinery. Eight metre high blast walls were also constructed around the transformers together with foundations for Generators, Flywheels, control buildings and foundations for distribution equipment for connection to the National Grid

With the delivery date for Siemens Synchronous Compensator Units set and immovable, works commenced in Nov 2020 and despite numerous challenges along the way including design changes, extreme weather, ground conditions and more, the project was successfully delivered and Siemen’s installation commenced on programme. 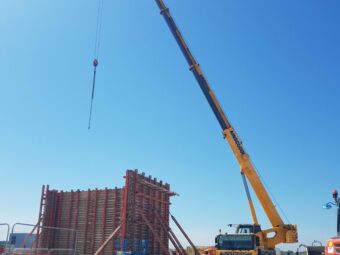 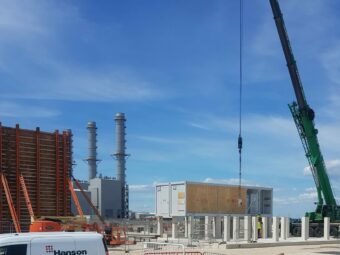 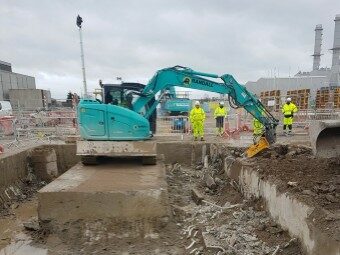